History is a fusion of the past and the present. It tends to diversify; adapt itself to the conventions of a particular time, serving as a glimpse into a bygone era. Being a sanctuary, it acts as an intermediary between the past and the present. The imprints left by the past are influential in shaping the present and both synchronize in terms of their relevance. And it remains a witness and testimony to the transitions and transcendence of time. Centuries lapse, but its existence continues to overlap with the present, forging a bond so unprecedented that anyone would get lost in it.

The past is an entrapment, a reservoir of memories which doesn’t expire. History doesn’t expect anything except reverence, respect and recognition in its wake. The past holds sway in the present, reminding us of its existence. Nothing hurts it more than vandalism, ignorance and infamy. Being the harbinger of the past and present, it tries to be a bastion of peace and prosperity.

In certain situations, history becomes contentious and controversial becoming a tool for propagandists to leverage hate against it. Memories and history eroding, breaking and tearing you apart. No one to console the dampening end of an era, of timelessness that you want yourself associated with. Buildings becoming corpses and living examples of the past.

History is undeniably rich, and the past linked with it can never be denied. As much we try to hide and erase footprints of it, somehow it finds its way to resurface back. It gnaws and pukes at us for living in a fool’s paradise. Disowning that heritage which once was part of us, won’t achieve anything. Being outcast will leave a permanent scar on history, the traditions, practices and reflection of those times it has depicted.

It is an identity, a vestige of antiquity that portrays the past, telling tales about personalities which embraced it. In the present, history offers a narrative of the past, fueling our imagination and making us contemplate what it may have been. In its absence, a dearth and barrenness are experienced which is irreplaceable. History is a gift, which needs caring, nurturing to guarantee its existence. The past and the present are a part of our identity and representative of who we are. 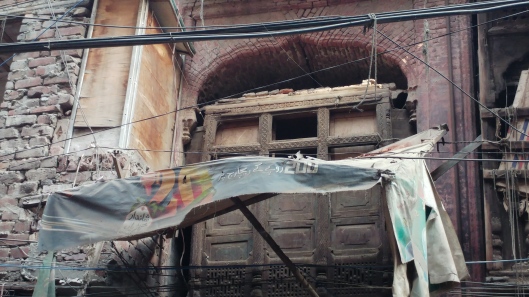 Irrespective of the sacrilege, history continues to trudge along broken paths; continuing its journey of mingling the past with the present and evoking our sentiments. Let history’s purity be not diluted and ensure it doesn’t diminish and vanish.