“Travelling is the best way of getting acquainted/accustomed to other cultures, which teaches us a lot about their customs and values said Zaheer-Ud-Deen Khwaja to me, one of the most renowned architects produced by Pakistan almost 20 years ago.” These words, were like pearls of wisdom for me along with many other exchanges with him, that helped transform my thoughts into something more diverse than they may have turned out to be. He had played a pivotal role as an architect who was internationally recognized and won many accolades/awards within his own capacity for Pakistan, but the selflessness this man had displayed throughout his life is worth exploring.

For me, having personal access to him was trivial courtesy of him being my mother’s mamo and brother of Safia Manto, my grandmother. I called him Zaheer Nana, out of sheer love and respect for a man who was revered by the whole family for his wisdom, knowledge, balance and impeccable honesty which may be unbelievable to my readers currently. He has been forgotten with time, achievements of his groundbreaking in many aspects, languishing and largely written off.

I discerned a few decades ago, the role of architects in that era wasn’t as celebrated and given equivocal footing, as say someone who was a writer, an actor or a poet for example. But, what Zaheer-Ud-Deen-Khwaja achieved was unprecedented at a time when broadcast media and the internet did not exist.

Zaheer-Ud-Deen Khwaja, was born in Kenya in the early 1920’s where his father Qamar-Ud-Deen was employed as Public Prosecutor in Zanzibar a British protectorate in those days. His father had originally settled in Karatina, about a hundred miles from Nairobi so due to rudimentary schooling available, the area was majorly populated by traders from Gujrat, India who ran the primary school there. So, his initial instruction medium of education was hence in Gujrati. Qamar-Ud-Deen, his father who was serving in Zanzibar as a Public Prosecutor, headed by an Arab Sultan died an untimely death when he was assassinated for being mistaken as a British Police officer due to his fair complexion in 1936.

The rather unforeseen seen death of his father, must have been a major catastrophic event in their lives, but their mother who was uneducated but a towering personality in her own right took over the family reins. Thanks to the representation of his uncle, Shams-Ud-Deen, a member of the Legislative council and an influential person in his own right, ensured that the widow of Qamar-Ud-Deen was provided financial help by the British Colonial Government, a pension for the entirety of her life, bursaries for the four sons till the age of eighteen and completion of their education.

Also, allowances were allotted for his three sisters till they got married. Considering these events, Miss Qamar-Ud-Deen took the momentous decision of migrating to Bombay (now Mumbai), India. After arriving in Bombay, aged 14 he found himself to be the head of the family, but his mother as mentioned earlier was a woman of virtue and considerable intellect who had an immense influence on her children, which left an everlasting impact on all of them during their respective lifetimes.

Restarting his education, he completed his High School from St. Mary’s High School, Bombay and decided to pursue Architecture on the advice of his cousin Zafar-Ud-Deen, although as per his memoirs he barely scraped through Art as a subject in his Senior Cambridge examinations!  He took admission in the renowned Sir J.J School of Art where he pursued his architecture. It was a time he remembered rather fondly, with his initial struggles in the first two years at university and the development of a close bond with his Professor Claude Batley who was the Head of the Department of Architecture too. During the third and fourth years, all the students were encouraged to visit the northern and southern parts of India, to get abreast of the finest traditional architecture and diversity it had to offer. By the fifth year, doing an apprenticeship was mandatory in a firm of architects and he was attending of 2 hourly classes in the morning.

He then appeared for an external exam of the Royal British Institute of British Architects, as the diploma offered by the college he attended was not accepted internationally back then. After successfully passing the external exam, he applied for a post-graduate scholarship on offer by the Government of India, which he received for a degree in Civic Design at the University of Liverpool, UK. While aboard the ship to the UK in October 1946, he was also accompanied by a future Nobel Laureate and renowned Physicist Professor Abdus Salam, Aslam Raza who later became the Chief Justice of the Supreme Court of Pakistan and Ikramullah Niazi, a P.W.D engineer and the father of iconic cricketer turned politician Imran Khan.

Besides completing his post-graduation at the University of Liverpool, he also got the opportunity to travel around the whole of UK and visited a host of other countries in Europe for which the Government of India generously provided financial assistance. By 1948, after being elected as a certified member of the Royal Town Planning Institute, he made his way back to Pakistan in October of the same year.

Upon his return to Pakistan, the scholarship he had been awarded by the Government of India contained a clause or a surety bond which bound him to serve them in an individual capacity to the field he was linked with. Apparently, at that point of time he was ironically one of the only qualified architect and town planners available within Pakistan! While job hunting for a few months, he landed up a job in East Pakistan (Now Bangladesh) as Assistant Government architect in Chittagong at a salary of Rs 800. The time spent there was remembered fondly, along with this comradeship and close bonding with his Bengali colleagues of that time who never forgot him for his sincerity and kindness he had meted them with. After his marriage to his beloved wife Tahira, in December 1950 and with whom he shared a beloved bond of almost 55 years till her death in July 2005.

After a year’s stint in Chittagong and Dhaka, he was offered an important position of Architect and Town planner of Thal Development Authority (TDA) in West Pakistan to oversee a multi-million regional planning covering an area of six million acres of desert which he graciously accepted. As he narrated it in his memoirs, the five years spent involved in the development of this region was one of the golden periods which included designing of the Quaidabad hospital by him as well.

The Thal Development project is listed by the Britannica Encyclopedia is listed as one of the most important development projects in the world. After his association with TDA for five years, he embarked upon taking charge of Pakistan P.WD  in the then capital city, as Chief Town Planner and Architect on the direct orders of the then Prime Minister Huseyn Suhrawardy who wished to enlist his services in end of 1957.

Also in 1957, a Quaid-e-Azam’s Mausoleum Architectural Competition to build a budding memorial to the founding father of the nation was held for which he was assigned to select a jury of assessors for this momentous project. In a rather unfortunate turn of events, the design awarded as the winning one was not acceptable to Mohtarma Fatima Jinnah and she hired an architect of her own choice from India who designed the current mausoleum built in honour of Quaid-e-Azam Muhammad Ali Jinnah. During 1958, as the architect-in-chief of the P.W.D and later with the Karachi Development Authority (KDA), he was actively involved in the planning and execution of the Korangi township, and various other projects during the time spent there. In his period spent there, he dealt with the growing developmental issues of Karachi which was experiencing rapid urbanization due to being the economic hub of Pakistan and remains to this day.

Also, in an interesting incident narrated in his book with the founder of Dawood Hercules, Ahmed Dawood is shared in this snapshot: 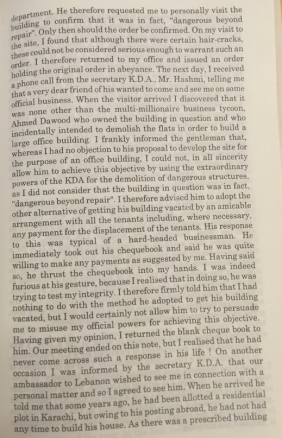 His achievements remain unprecedented, but he was a family man, a principled father, a dutiful husband to his beloved wife Tahira and a doting grandfather to his granddaughters Mahvash, Sarah, Anam and Alizeh.